Media Events and the Case of the Euromaiden Revolution in Ukraine

One of the articles in the latest issue of Nordic Journal of Media Studies looks at the Euromaiden Revolution in Ukraine from the perspective of media events theory. Nordicom’s communication officer Mia Jonsson Lindell met with the authors Göran Bolin and Per Ståhlberg to discuss their article and let them reflect on how the current war in Ukraine connects with previous revolutions and events.

Mia Jonsson Lindell (MJL): I’d like to start by asking you to say a few words about your article in relation to the theme of this issue of Nordic Journal of Media Studies: “media events in the age of global, digital media”.

Göran Bolin (GB): This article fits very well into this issue of NJMS, as we are analysing the Euromaiden Revolution from a media events theory perspective. The analytical approach came very naturally to us, as we had just finished a book based on two projects we’ve had in Ukraine since 2013 (Managing Meaning in Ukraine: Information, Communication and Narration since the Euromaidan Revolution. MIT Press, forthcoming 2023). In the article, we expand a bit on the discussion in one of the chapters and are more detailed on media events theory than we are in the book.

Per Ståhlberg (PS): Yes, and the idea to write this article actually came from trying to solve a conceptual confusion that we saw when starting to think about the Euromaiden Revolution in terms of media events. In Dayan and Katz’s seminal book Media Events: The Live Broadcasting of History from 1992, they are writing about a particular form of media events which they call “transformative media events”. In that category, they discuss events such as protests and revolutions. But we quickly realised that many others, including Dayan and Katz, had also discussed another form on events called “disruptive events”. We wanted to dig deeper into these concepts in relation to the Euromaiden Revolution.

MJL: And did you solve the confusion? Or, how did these concepts help you understand the Euromaiden Revolution?

“To me, it was enlightening to go back to Dayan and Katz’s book and use their media events theory to contextualise a dramatic event like the Euromaiden Revolution”.

MJL: What about the contrary – what was problematic when applying this concept to the revolution in Ukraine?

GB: Both the disruptive and transformative events that Dayan and Katz theorise give examples of revolutions, but they are constructed in a way that they can’t be combined. We instead used them to distinguish between different phases of the Euromaiden Revolution. It starts as a transformative event, that then gets disruptive when the police start to crack down on the protesters, to then line together again for the transformative event to continue. These two types of events, transformative and disruptive, relate to one another but are not really the same. That’s how we tried to solve the problem.

PS: It was quite stimulating to walk in Dayan and Katz’s footsteps in this article. We are not playing around with the concept but rather use them as they are described – as radically different concepts.

MJL: You also talk about the role of the media in these events: What makes an event a “media event”, and not just “an event”?

PS: I think that if we are speaking about largescale events today, it’s hardly possible to come up with any kind of event that is not a media event.

GB: Yes, I agree. Perhaps what distinguishes media events are that they are not only mediated after they happened, but they are mediated as they are happening. The point with Dayan and Katz’s book, where the subtitle is “the live broadcasting of history”, is that it’s being broadcasted as it happened, and, in that sense, all largescale events since television are media events.

MJL: Interesting! Let’s talk a little bit about what is happening in Ukraine today. In the article, you present the three revolutions in a timeline. Could you reflect a little bit on the current war and how it fits in the timeline? How might media reflect on how people view the war, for example?

GB: As with any type of event, you have a timeline: a starting point, a middle, and an end point. For Ukraine and the Euromaiden Revolution, the endpoint was signing the EU Association Agreement. Now, with the current war, we might have a starting point, but we do not know when it will end and what type of transformation will have happened, both in Ukraine and Russia. It’s for the future to see, and it will be possible to make such an analysis in the future.

“When trying to understand what is happening in Ukraine, we cannot avoid talking about representation and narratives”.

PS: One should perhaps add that it is a bit uncomfortable to be talking about the current war, where people are dying, in terms of narratives and representations. But still, when trying to understand what is happening, we cannot avoid talking about representation and narratives. You can also hear very clearly in the debate that there are different interpretations of what is happening in the Ukraine, and that different sides are referring to different narratives. What we are doing in this article is to first look at it as one disruptive event, we then look at the somewhat longer transformative event, and finally we look at the longer narrative of the three revolutions. So, I guess you can construct other scales of understanding, but it’s possibly in that longer narrative that you have to understand the current war.

MJL: And that will maybe be your next book project then? Thank you very much for taking the time to talk with me, and good luck with your future research on Ukraine.

The article “Disruption and transformation in media events theory: The case of the Euromaidan Revolution in Ukraine” by Göran Bolin and Per Ståhlberg was published in Nordic Journal of Media Studies” edited by Kirsten Frandsen, professor at the Department of Media and Journalism Studies at Aarhus University, and Anne Jerslev and Mette Mortensen, professors at the Department of Communication at the University of Copenhagen and published on 9 May 2022. You can read and download all articles free of charge. 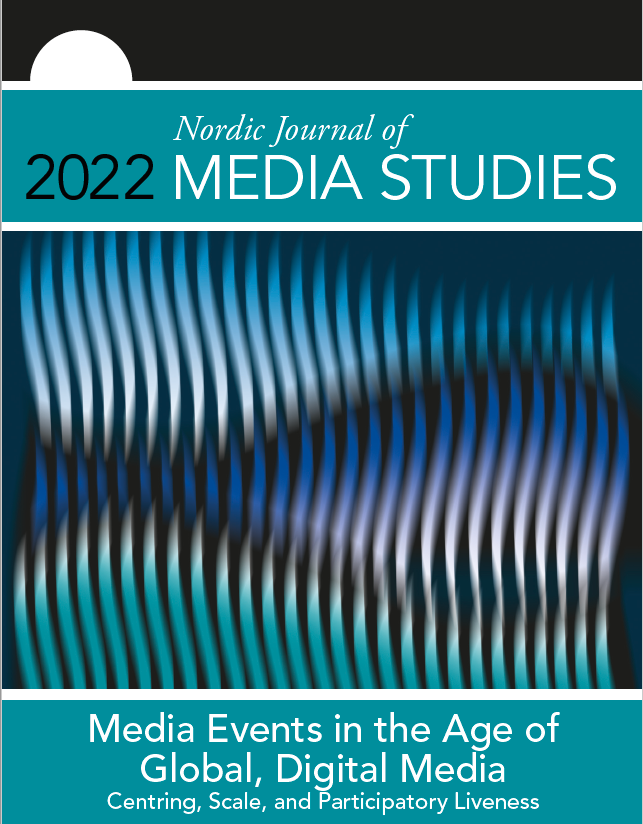 Photo by Karollyne Hubert via Unsplash.

Social Media and the Eternal Search for Authenticity

In a new article, Ida Roivainen from Tampere University argues that recurring representations of coffee articulate YouTube’s girlbosses as productive and ordinary entrepreneurs who seek belonging and meaning in life.

NordMedia Network is organizing two brand new online writing retreats in the spring of 2023. The dates are 31 March and 28 April. Choose one or both, and join us for a writing retreat!

The ethical rules of journalism were first put in writing in the US in the 1920s. A hundred years on, we are looking at a completely different audience. Researchers at Karlstad University have written an article that challenges old, ingrained rules.