Nordicom starts off the new year by publishing a new anthology, Power, Communication, and Politics in the Nordic Countries. The book is critical reading for those interested in political communication in the Nordic countries. Professor Eli Skogerbø, co-editor of the book, sits down with Nordicom’s editor Johannes Bjerling to discuss the book.

Power, Communication, and Politics in the Nordic Countries, edited by Eli Skogerbø, Øyvind Ihlen, Nete Nørgaard Kristensen, and Lars Nord, contains 19 chapters on political communication in Denmark, Finland, Iceland, Norway, and Sweden. It is an open access publication and you can download the entire book here.

Johannes Bjerling (JB): It’s a book about political communication in the Nordic countries: 19 chapters and roughly 40 authors have contributed. And there is one book, in particular, that is mentioned many times in the anthology. Do you know what book I have in mind?

Eli Skogerbø (ES): There are actually two that come to mind, but I think you are talking about the book by Hallin and Mancini from 2004, Comparing Media Systems, which has been very, very influential in the Nordic setting. Influential and discussed, and the framework of that book has become a cornerstone for much of the Scandinavian research on media systems. You could say that it has had an impact on the authors of this book too.

JB: And the other book?

JB: Starting with the first – the book by Hallin and Mancini – would you say that that book is still valid for media systems studies?

ES: I think what we say in the book, in different chapters as well as in the introduction, is that it is valid as a theoretical model; in the sense that that democratic corporatist media systems still share certain characteristic traits. But Hallin and Mancini themselves have several times highlighted that Comparing Media Systems is outdated when it comes to what contemporary media systems are all about. As it was written in the early 2000s, it has very little to say about hybrid media systems, very little to say about digitalisation. It’s really all about the old newspaper systems, the public broadcasters, and so on. However, it’s not outdated in the sense that all systems are marked by path dependencies and structures that tend to live and last very long. But it lacks a lot in the empirical descriptions.

“Hallin and Mancini have themselves highlighted that Comparing Media Systems is outdated when it comes to what contemporary media systems are all about.”

ES: When you ask whether there is a Nordic political communication system, it’s a little bit different from the media systems, because the political communications systems also have to take into account the political systems of these states. Our clear-cut answer in the book is that, yes there are many similarities that seem to generate important factors that sustain democratic communication – but they are not identical. And what we do in the book is to claim that it’s very important not to group these countries as one model, but to treat them as separate countries that have significant differences, but where you can find some factors that join them. And some of the factors that we have pointed to are pragmatism, the role of negotiations, and the flexibility of these systems.

How do the Nordics stand out?

ES: What stands out from the chapters in this anthology is that the Nordic countries are not very professionalised when it comes to political communication – apart from the very top level. The prime ministers and the very top level are professionalised, but otherwise, it’s clear that politics is still very much a business for voluntary people who do a lot of things themselves. However, I’m not quite sure whether that is very different from other countries. I think that if you go to France or Britain – or, for that matter, the United States – you will find that there are lots and lots of volunteers and mobilisation of people in election campaigns and demonstrations. But I don’t think we have reason to say that the Nordic countries are either provincial or very different from other democracies.

What I do think we have some reason to say is that the Nordic countries have some kind of benefits when it comes to democratic resilience. And to go back a little bit, I think that can be related to this pragmatism, this weight on finding compromises, which is a trait you find in all the Nordic countries – that there is a high trust for the media and political institutions. Not among every group in society, but more so in the Scandinavian, or Nordic, countries than elsewhere. I don’t think we are very different when it comes to details about how political communication engages, but I think we are different when it comes to these factors of continuance and crisis management. And of course, you can relate that to the welfare state and to the economies.

JB: There are two different developments that, together, have resulted in the situation where we are now. On the one hand, the political systems in the Nordic countries have changed – overall, there’s more fragmentation, fewer loyal voters – and on the other hand, the media systems have changed. So, when reading your book, I think those two developments are the ones that together drive the development. What do you think?

ES: I think you’re absolutely right. If you look at the political systems, I think the five-party model was valid in Sweden longer than in the other Nordic countries; in Sweden, it wasn’t until the progress of the Swedish Democrats that the five-party model was no longer applicable. Whereas in Denmark and Finland and Iceland – and Norway, for that matter – these processes have been more gradual, perhaps, and with other types of shocks that have hit at different points in time. But I think it’s very clear that the five-party model has now been disrupted everywhere. And today we see more polarisation in all the Nordic countries – maybe a little exception for Iceland, which is also different in many other ways – but we see more polarisation, some more of what we could call more extreme parties. They are not very big, but you see the same tendencies in the Nordic countries as elsewhere. So, that’s definitely something that has changed the way politics is communicated. For instance, if you look at the chapter on rhetoric, the authors of that chapter argue that the development has changed the political rhetoric, in that things that were not accepted before have now become accepted. So, I think it’s right to conceive of changes within the party systems as one of the drivers behind the overall development.

“Minority and indigenous groups’ voices are heard more today than before in the Nordic countries. There are even more groups coming in and these ‘new voices’ are heard more often.”

And of course, these developments have also developed alongside the spread of digital media. Because the political changes have gone hand in hand with the development and spread of social media, resulting in more politicians using social media to establish direct contact with voters, not least when it comes to the mobilisation of voters, and so on. So, I think you’re right about that.

But I also think it’s important to look at other things that have happened. When we look at the Norwegian, Danish, Swedish, and Finnish case, we also see that it’s not only a question of polarisation – it can also be related to the fact that new voices are heard more often these days. We have the indigenous voices – more specifically, the Sámi in Finland, Norway, and Sweden, and the Inuits, in Kalaallit Greenland and Denmark – that are heard more today. We have more recognition too; if you go 20 years back, there are more groups coming in and these “new voices” are also heard more than before. This, I think, is an interesting and very important difference. We also have new minority groups that have accessed the political parties and the parliaments – and also the local governments. And you see that very clearly in Sweden, of course, but also in Norway and Denmark. And that’s also an interesting thing that has happened over the past 20 years.

JB: If you compare the present with the past, where you had the economic left–right scale and five parties – two to the left, two in the middle, and one conservative party – political communication has become more complex, and perhaps more difficult to understand. Today, you have the GAL-TAN dimension, Green, Alternative, Libertarian, with climate change and things like that. Politics is becoming increasingly complex, I would say, in the Nordic countries as well.

ES: I think we have to recognise that our societies really are different today. And then, I think the big challenge – which the authors try to address in the anthology – is, do we find traits that help us sustain and build on the welfare models and to keep these democracies working in a changing world? I think that’s what we actually try to say something about. Maybe not in so many words, but I think that’s what the takeaway of this book really is: what are the traits that we can build on, and what has changed when it comes to political communication in our part of the world?

JB: Traits to build on in order to keep the Nordic countries resilient democracies?

ES: I would say resilient, inclusive democracies. And If I’m allowed to say just one thing more. One thing that I’m really proud of about this book is that we have highlighted that political communication is not only campaigns and hard news, which is often what you find in these big-scale comparative studies. Political communication is also something that takes place in popular culture and entertainment – TV series, for example. We point to Borgen and Invisible Heroes as series that really say something about the Nordics when it comes to political communication, and we try to involve new actors. So that’s perhaps the two things that I’m most happy about. And of course, there are things that we didn’t include that I will not talk about. I will leave that to the reviewers!

JB: And that, I think, will be our final words! Thank you, Eli, and let’s hope the book will find many readers – I think it deserves it!

ES: Thanks. Yes, let’s hope the book will find its readers, in the Nordic countries as elsewhere. 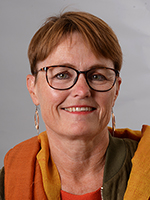